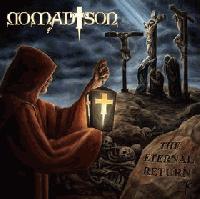 The band specialises in two very distinct sounds, the first being the classic doom sound of slow, drawn out guitars with steady drums driving the songs along, this is perfectly delivered in songs like “Can’t Turn the Tide”, the title track “The Eternal Return” and the album closer “Throne of Judgement”. The second sound appearing on the album is the more progressive inspired sound, often featuring fast paced riffs with keyboards playing a more central role in order to full fill the contrast to the aforementioned sound. This sound can often be identified by the perfectly executed guitar solo, as with the opening track of “The Vigil” and “Sigma Draconis”.

While most bands would be happy having two distinct sounds co-existing in perfect harmony, Nomad Son goes where most bands merely fantasy about going: they mix them together and they do it magnificently. With tracks like “Comatose Souls”, a track starting in a landscape of doom and despair before reaching for the light and a more progressive sound scape, it is easily one of the albums highlights and it displays the skill that lies in this five piece band. The longest track on the album “Wing of Golgotha” is another example of this skill. While never reaching the pace of the more progressive songs it mixes keyboards with a very doom inspired sound, once again this mixture is executed perfectly.

All in all “The Eternal Return” is one of the latter years best offerings to the metal gods. The perfect mixture of the two sounds combined with the overall skill of the musicians accompanied by the loud, screeching sounds of Jordan Catajar on vocals make this a perfect album of doom.