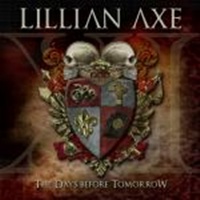 Louisiana’s Lillian Axe emerged during the latter days of the glam/ hair metal movement in the late 80’s and continue to slug and crawl their way through the musical landscape, intent on appeasing their fans and not succumbing to any negativity that may appear on most musicians radar screens. With a new singer Brian Jones handling the microphone and a new European label deal in place via AFM, “XI: The Days Before Tomorrow” showcases 10 vital cuts for the long-term Lillian Axe fans.

Much of the melodic hard rock hooks and spirit coming through songs like “Death Comes Tomorrow” and “Take The Bullet” falls right in line with acts like King’s X and Saigon Kick- multi-part vocal harmonies sitting kinetically against addictive guitar riffs while the rhythm section hones in on grooves with a progressive touch. Ballads like “Bow Your Head” and the lullaby-ish “My Apologies” recall some of the best moving slow songs from artists of the mid to late 70’s, the latter showcasing the depth of Brian’s soulful voice that has some parts Kansas, The Eagles and King’s X combined.

There’s almost a Native American sound going through another favorite “Gather Up The Snow” – the opening riff segueing into this mid-tempo part oriented for hair flailing, fist pumping action in a live environment. Guitarist Steve Blaze really pours his heart, soul and creativity into the songwriting and performance aspect of this album, guaranteeing songs like “The Great Divide” and “Caged In” multiple, intense playbacks from the listener who wishes to discover all the little subtleties going on with the end of a guitar riff, the vocal effects or just letting the totality of each song envelope your eardrums.

You don’t say often in a band’s three decade plus career that their best studio album is their latest- but “XI: The Days Before Tomorrow” contains all the brilliant songwriting and performances I’ve come to expect from Lillian Axe with no filler material in sight. In a just world, this would sell like gangbusters.