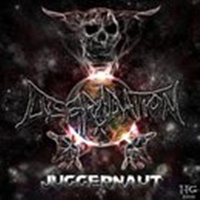 This Chicago, IL four piece send your headspace into a tailspin with this debut album “Juggernaut”. Welcome to the thrash arena, with whirlwind riffing, spitfire vocals and soloing skills rivaling the best in the Bay Area. Songs like the up tempo “The Reckoning” on through to the triplet heavy rhythmic “Trail Of Sin” serve up notice that Testament, The Haunted, Heathen and any of the new breed of thrash maniacs better be aware that Degradation are nipping at their heels in ascending up the metal ladder.

Even though the band prefer to keep most of their tempos at heart racing paces, Alex and fellow guitarist Mike Hartman make sure that their riffing and soloing maintains cohesion with melodies that you can retain well after your experience through headphones or speakers. It’s hard for me to pinpoint a favorite- one minute it becomes the more mid-tempo, Overkill sounding “Rise To Fall” that wouldn’t have been out of place on their “Taking Over” album, the next album pass I’m feeling the viciousness of “Thrill Of The Kill”.

Guitarist Alex Manske employs one of those rapid machine gun style vocal deliveries- but with a slightly gruff edge that is easily discernible. His best work comes in on The Crown cover “Executioner… Slayer Of Light” and the face pummeling title track. You can tell with the core lineup being together since their formation in 2001 Degradation have worked long and hard in rehearsals and on stage to deliver their tight thrash to audiences locally- and should be ready for a real label contract based on these 8 songs.

I’ll be following this band intently- Degradation mesh the old school philosophy with a blistering sense of preciseness that will grab your attention, something very rare in today’s scene.