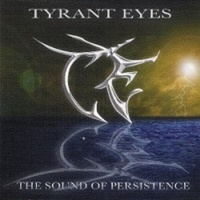 TYRANT EYES – The Sound of Persistence

German power metal quintet who have now gone the self-released route for their third album “The Sound Of Persistence” after their last release on Scarlet Records in 2003 “The Darkest Hour”. For my first exposure to this band, the impressions are decent with their workman-like approach. Songs like “Beginning Of The End” and “Infraction” have this darker tone along with vocalist Claudius Bormuth’s Hansi from Blind Guardian bellows that compliment each other smoothly.

Artists such as Grave Digger, Rage and Morgana Lefay come to mind the most when handling this 10 song record. Some of the rhythms and riffs can get very boring very fast (the closing parts of “Ingratitude”) but I believe if you endure you’ll find much to scream about in joy with this style of late 80’s to early 90’s power metal Tyrant Eyes employ. Some of the tempos border on old school thrash, such as the 1-2-3-4 snare/ double bass blitzkrieg during the verses of “Born Criminal” or their nod to the Bay Area “Infraction” (complete with this eerie Dio-like keyboard part) to give the album a necessary burst of energy. The 6 minute epic ballad “Friendship” is a first for the band, including German lyrics and having this domestic tradition that would appeal to older Accept and Blind Guardian fans.

Considering the last couple of Morgana Lefay records have been going in a slightly modern direction, those who miss their mid 90’s style along with Marcus Amend’s multi-faceted mix of triplets, chord dynamics and clean guitar lines will find Tyrant Eyes aurally delightful. These musicians play from their heart with passion, admirably sticking to their guns and I think as a result will continue with a faithful following.

TERRORTORY – The Seed Left Behind