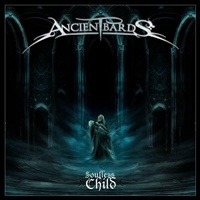 Italian symphonic power metal received it’s massive upstart through the signing of Rhapsody to Limb Music, and upon releasing their debut album “Legendary Tales” started their ascent through the hearts and minds of hundreds of thousands across the world. This sextet on their second album “Soulless Child” fill a similar niche as early Rhapsody, although incorporating occasional mid-tempo elements like Lacuna Coil to break up the steady choir vocals, furious power riffing and incessant double bass runs. Main female vocalist Sara Squadrani has a comforting, gothic siren quality to her melodies.

After a requisite “Struggle For Life” build up intro, the larger than life “To The Master Of Darkness” charges from your speakers, complete with the stop/ start instrumental runs, choir bridges, Sara’s high note hitting propensity and the Federico Gatti octopus percussion show all symphonic power metal followers live for. Daniele Mazza’s keyboard spotlight gives “Gates Of Noland” this majestically fantasy-laden number the right Middle Ages war torn atmosphere as the female and male choirs battle for supremacy. The last three tracks (the title cut,” “Through My Veins”, and “Hope Dies Last”) take up the final 31 minutes of record duration, so expect longer virtuosic instrumental passages and swings in mood dynamics, always a trademark of these symphonic bands who almost play metal for theater’s sake.

“Soulless Child” could be a solid step-child to both classic Labyrinth and Rhapsody (Of Fire). One wonders if all the studio sounds could be replicated with vigor in a live setting, but for now the Ancient Bards live up to their name- providing entertaining power metal to those who live for thunderous, obvious melodies and jacked up tempo annihilation.

While we wonder what the Alex Staropoli/ Luca Turilli Rhapsody band separation will result in for their next studio efforts, maybe “Soulless Child” could fill your symphonic hearts this winter season.