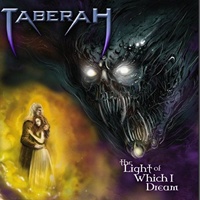 TABERAH – The Light of Which I Dream

Always invigorating to receive albums from the land down under Australia. Metal Evilution manager Dave Balfour kindly sent this debut album from Taberah, a four piece who’ve been developing their sound since 2004 and as a live act since 2006. “The Light Of Which I Dream” being their first full length is something quite exciting for those who miss the older 80’s Iron Maiden furor and 90’s era Blind Guardian days, along with a pinch of Queen and AC/DC to keep things sounding a little rock and roll when need be.

Guitarists Jonathon B and Myles Flood share the axe duties, and much like a veteran power metal band know when to put the galloping riffs and triplets to the test, harmonizing to glory on winning tracks like “Freedom Or Death” and “Brothers Of The Fire”. The personalization of “The Call Of Evil” with its opening intro bass break/ finger snapping or the shouted “Rambo” refrain during “Fearless” give Taberah a distinct personality advantage over the numerous power clones who seem devoid of trying something unique to separate them from the pack.

Production duties from Joe Haley of Psycroptic keep everything on an honest playing field, the sound vibrant and very much indicative of how I would imagine Taberah to be on stage. For a drastic change of pace you’ll get a short acoustic slow piece entitled “The Ballad Of Ruby Joy” which again plays to their 70’s Queen influences, although I believe this is an area where vocally Jonathon needs to shore up his melodies as his natural register is more inclined for the faster and electrically driven songs.

Drummer Tom Brockman and bassist Dave Walsh play just as major a part in the Taberah sound, juggling tempo control from slow groove to fast gallop and back again on another highlight, the 7:28 title cut.  You’ll hear some fantastic, tasteful lead work much in the Maiden or Priest mold where the bands didn’t mind going for an extended break or two. My favorite song would be the Blind Guardian-esque “Requiem Of The Damned”, a rollercoaster riff monster that wouldn’t have been out of place on “Somewhere Far Beyond”.

One of the best new power metal bands I’ve heard in quite some time, we have serious players in Taberah and I hope they continue to ascend upward in terms of sales and popularity.