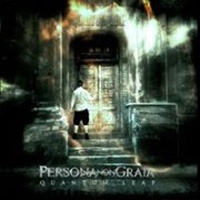 One of the favorite quips my high school librarian had happens to be the name of this Greek progressive metal band. My librarian meant you were on your way to getting kicked out for poor conduct, but the actual meaning of Persona Non Grata in English from its Latin roots is ‘an unwelcome person’. Might be a strange moniker for this particular band, but given Greece’s prolific tendency to love epic and power metal bands of an international flair over its domestic output its not a far reaching stretch. Changes are afoot since the release of their 2009 “Shades In The Light” debut record- a new vocalist in Aris Pirris and bassist in Apostolis Kalsas plus a fresh contract with Germany’s Massacre Records, setting the stage for this 10 song follow up “Quantum Leap”.

It appears that the chemistry between guitarist Chris Gatsos and keyboardist John Ioannidis leads Persona Non Grata into more conventional elements through material like “Lend Me A Hand” and “Diversity”, combining the fun virtuoso jam aspect of say Dream Theater with the softer, melodic spicing of long lost German act Superior or the highly underrated Poverty’s No Crime. Aris has a slight enunciation issue with some of the lyrics, working much better when he is clean and clear in lower ranges as some of his high pitch action sounds a touch forced and out of character- “Inertia” being the obvious example of both the positive and negative aspects. “Quantum Leap” does possess some interesting organ work during the atmospheric “Journey’s End” where Persona Non Grata explore some of their ambient and quieter influences.

It’s never an easy proposition to keep a unit moving forward when you have to replace members between albums. Persona Non Grata have the talent within its members to deliver outstanding progressive metal which balances ability against defined, distinct arrangements. “Quantum Leap” as such is a transition record with peaks and valleys, one which should set up a pinnacle release with the follow up.