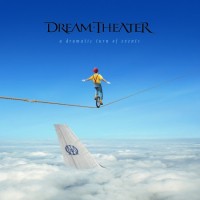 I owe Dream Theater enormous gratitude. Were it not for me discovering “Images and Words” in my early teens I might not have evolved the predilection I today have for originality and innovative thought in metal music. Before I heard “Images and Words” my listening charts consisted solely of Iron Maiden, AC/DC, Kiss, Guns n’ Roses and Mötley Crüe. Not that it’s something to be ashamed of. These are all highly valued bands on my listening charts today. Also, in my defense, I was thirteen at the time I discovered “Images and Words”. Still, I don’t think it improbable that the spark lit by this discovery is why I hold bands like Opeth, Arcturus and Leprous in the highest regard today. It was an eye opener so to speak, and still to this day, if asked what my all time fav album is, “Images and Words” fights with a few other ones for the top spot.

So what is it with “A Dramatic Turn of Events” that makes me somewhat uninterested? To be fair, this album is possibly among their best since “Scenes from a Memory”, but it is still not too distinguished from their last four releases either. My biggest problem with Dream theater ano 2011 is the predictability in vocal style and melody lines. Remembering the playful vocal exploits showcased on “Take the Time” and “6:00” I feel that the vocal output on “A Dramatic Turn…” is out of synch with the progressive nature of the remaining instruments. On “Images…”, “A Change of Seasons” and “Awake” LaBrie was much more in tune with the rest of the band. He was making progressive melody lines which fit the progressive expression of the other instruments perfectly. From “Train of Thought” till this last release he has steadily developed his melodic lines into more commercially acceptable hooks and choruses. Now the constant “dragging-out-of-sentence-endings-into-eternity” is turning into a predicable wave of repetitiousness. I feel like he has been using the same melodic content over on at least the three last albums. The irony of it all is that in trying to mix the band’s progressive music with more listener friendly melodies, I am sure that the band turn away more fans than they gain new ones. They are after all a progressive metal outfit. I am sure that if Dream Theater started working on some more progressive melody lines they would probably become even more popular.

This being said, there are tendencies on “A Dramatic Turn…” that I can dig. LaBrie’s best effort is on the progressive metal monster song “Lost not Forgotten”. I also find “Breaking All Illusions” and “Outcry” to have some outstanding, not to mention, classical Dream Theater instrumentation awesomeness. Both these are somewhat drawn back by highly predictable vocal lines though. I am sorry James, this might appear a personal attack at you, when in fact it is an outcry by a fan that loves your earlier work and knows you can do better. Leave the predictability for your solo album and prove that Dream Theater is the best progressive metal band in history once more.

As for the drums, I don’t notice that Portnoy is gone at all. Maybe drummers do, but to me the new guy is just as good. Since I actually prefer this album to the last four, maybe it was for the better that some changes in the band’s core were made. I am sure Portnoy will return at some point in time anyways. With 20 years in one band I have no problem understanding that a break is in due time.

All in all, “A Dramatic Turn…” is a turn in the right direction if you ask me. There are many things with this album I can dig. The reason for the relative low score is that I only find half the album to capture my attention. Also the ballads were progressive on their earlier releases, which made them interesting. “Images…” had “Surrounded”, “Another Day” and “Wait for Sleep”. They were all interesting and innovative. “A Dramatic Turn…“ has “This is Life”, “Far From Heaven” and “Beneath the Surface”. All songs that appear more like exercise in commercial courtship than actual heartchilds of engaged musicians. All of these three would function well as the new prescription sleeping drug “predictalium”, as they made me yawn my ass off. With some good, a few great, but ultimately too many boring moments, this album is still lacking in areas for me to be thoroughly impressed. (I am a little impressed though, as I always am by Dream Theater’s incredible instrumental perfection.) I guess I am an old school fan, so take that into consideration when reading this. If you like their later stuff, this should be the bomb.

THE MAGNIFICENT – The Magnificent