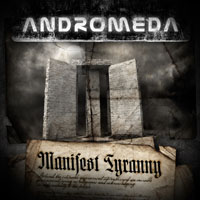 Progressive metal is in a renaissance of sorts as veterans have released some high caliber offerings this year (Arch/Matheos, Dream Theater, Redemption) while the younger acts strive to attain their own niche on consumers worldwide. One of the relative newcomers (given their studio album start in 2001) is this Swedish quintet Andromeda, who over the course of their four previous efforts have amassed critical appeal and a steady throng of supporters. Armed with a new record deal and Linus Abrahamson sliding into the vacant bass slot as Fabian Gustavsson pursues new musical pastures, “Manifest Tyranny” favors the song-oriented Andromeda listener, even with half of the album’s ten songs clocking in at 7 minutes and above.

Guitarist Johan Reinholdz is one of those technically sound players who certainly showcases numerous wow moments on this record like the solo during “Antidote” or the heavier, off time riff antics in “Stay Unaware”- yet restrains himself overall to keep the parts on target for the band’s benefit. Keyboardist Martin Hedin seems to unleash more of his natural organ sounds with a lot of the chord progressions and instrumental passages throughout- sometimes exotic and snake charming, at other times very current and pseudo industrial like the 9:37 epic “False Flag”. The rhythm section of Linus and drummer Thomas Lejon pursue double duty of juggling the time changes while also maintaining that cohesion necessary to make progressive metal listenable- and this is why I believe Andromeda stand near the head of the class.

The production values leave a little to be desired for the second album in a row- I can’t quite put my finger on whether it’s the particular tones (some instrumentation seems lower in the mix than others) or just boils down to studio budget limitations, but I do think if Andromeda wish to hit the Pagan’s Mind or Pain Of Salvation audience levels, this needs to be improved upon. Because based on songs like “Play Dead” or the emotional “Survival Of The Fittest”, Andromeda hit another musical home run with this album. Those who love song-oriented, melodically fueled progressive metal should run to get this.