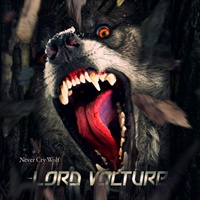 A Dutch traditional power metal quintet who seem to have a strong passion for the US scene on this second album “Never Cry Wolf’. Receiving numerous high marks in magazines and websites domestically and abroad for 2010’s “Beast Of Thunder” debut, Lord Vulture are an act willing to explore more than your average twin galloping guitar attack and air raid siren vocals.

For instance “I Am King” is more of a fun loving hard rock song while “Wendigo” contains a British metal meets close to thrash vibe- and this variety keeps the listener on his or her toes for the 11 song, 69 minute ride. Drummer Frank Wintermans represents the fleet of double bass foot brigade on “Korgon’s Descent”- rivaling Brent Smedley of Iced Earth in terms of his explosive meter and thorough fill work. “Necro Nation” could be Lord Volture’s signature kitchen stew track- incorporating a bit of Nevermore technicality with Vicious Rumors and Heathen power- along with a chorus very similar to classic Jag Panzer. Closer “The Wolf At Your Door” at 7:47 charges from the speakers with that gallop prototype as vocalist David Marcelis goes up and down his melody register with that Harry Conklin meets Graham Bonnet range.

It’s nice to have guitar players like Paul Marcelis and Leon Hermans willing to extended solo sections beyond the normal 8 bar measures during the concluding two minutes of “Celestial Bodies”- trading off and coming together as well versed axe men. Minor problems appear to come up when David reaches the upper scream stratosphere- he sounds like he’s straining himself and needs to be careful in a live environment for those shortcomings may send audience members heading for the exits.

Lord Volture won’t be mistaken for the normal keyboard happy, European power brigade- “Never Cry Wolf” as a result is for the old school heads and I’m sure plenty will love the pureness and passion behind this style.