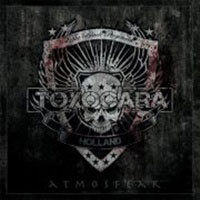 The Dutch death metal scene rolls onward and upward with this five piece technical minded act Toxocara. With guitars spewing lightning fast passages against slower breaks and a blasting snare/double bass master behind the kit in William Vlierman, songs like “Black Widow”, the bumble bee flights of chord/riff fancy “Bravo Two Zero” and much more straightforward “Confessions Of The Black Regiment” take in various influences from early Morbid Angel, Immolation and Monstrosity. And added nuance to “AtmosFear” would be the industrial keyboard and vocal effects in certain songs- but they don’t overpower the main instrumentation and Niels Feekes deep, guttural vocal patterns keep Toxocara fully engaged on their fervent underground appeal.

Not for the faint of heart, this quintet push their distortion pedals on warp drive and will leave you battered and bruised with every subsequent exposure. If you want to scare away the neighborhood, one listen to “Annihilation By The Angkar” or “The Kempeitai Hordes Of Hirohito” should do the trick- because even in their softer moments (such as the acoustic laden instrumental “Flashlight Shadows”) you know its only a matter of transition before the accelerated rhythms and picking will shave years off your sanity. What astounds me is how you can keep the separation of sound in the production room while generating so many wall of sound moments- and there are plenty of times where I can predict audience circle pit movements.

Forming in 2003 and now on their third full length release, Toxocara hopefully will gain more acceptance and higher billing status as a result of this exciting outing. With God Dethroned moving into their retirement phase, I say Toxocara could find themselves well equipped to pick up many of their listeners based on this album.