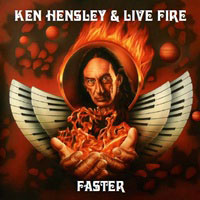 Most remember Ken Hensley for his Hammond organ, Mini-Moog and keyboard contributions to the British hard rock band Uriah Heep, whom he played with from 1970-1980. Retiring for the scene during the mid 80’s, he’s appeared time and again with new solo material since moving to Spain. So it’s a pleasure to hear this legend in his mid 60’s still cranking out viable rock material such as “Faster”. Filling out these 11 songs with the Live Fire band (vocalist Eirikur Hauksson, drummer T.A. Fossheim, bassist Sid Ringsby and guitarist Ken Ingwersen), you can close your eyes and feel transported into the mid 70’s to early 80’s scene with tracks like “The End Of Never”, “I Cry Alone”, and “Fill Your Head (With Rock)”, the latter reminiscent of Ken’s track record with Uriah Heep.

Growing up I recall that for many years in the 1980’s people didn’t think keyboards belonged in hard rock. Nowadays it’s as important an instrument as the guitar for certain sub-genres (power metal, gothic, progressive even) and you have Ken Hensley to thank as one of the pioneers along with Jon Lord and Keith Emerson. As a songwriter he understands that you can excel at an instrument all you want, but if you are unable to put your ideas into cohesive, comprehensible song constructs you won’t live a successful life in the music world.

One for the older generation, “Faster” has that bluesy depth that strikes the heart of his fans- and as such this is a solid album to consider for your collection.