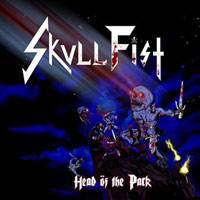 SKULL FIST – Head Of The Pack

Thanks to bands like Twisted Tower Dire, White Wizzard, Wolf, Enforcer, and Bullet, newer traditional metal is receiving another audience appreciation upswing. Younger bands willing to pull out their flying V’s, adorn their denim jackets with every band patch they can muster and just throw caution to the wind all in the name of true, scream at the top of your lungs metal. Canada’s Skull Fist impressed with their “Heavier Than Metal” EP in 2010 and as a result of touring with Bullet and Enforcer earlier this year, they are primed and ready to take the international scene by storm with their debut album “Head Of The Pack”.

The immediate impression vocalist Jackie Slaughter exudes is maniacal on the opening title cut. The guy clearly lives for the eagle high range and one only hopes that he takes care of his voice as the years advance, because this golden throat exists only within one in a million vocalists. Musically the song matches his effervescent heights as a distant cousin to “Thundersteel” from the mighty Riot.  The band can switch it up and go old Keel school on you with “Commit To Rock”, just a straight forward hard rock arrangement with blistering Jonny Nesta lead runs. “Get Fisted” is mid-tempo to slightly faster metal par excellence, featuring a series of “Kill ‘Em All”-like riffs plus a simple, effective Casey Slade drum beat and enough gang vocal energy to knock over any charging bull. Overall though Skull Fist win me over because they temper any excess with a firm foundation in the roots of metal- Iron Maiden, Judas Priest, Exciter, and others in that 80’s attack mode.

11 songs and 42 minutes of pure power, aggression, and vibrancy- “Head Of The Pack” makes no apologies for its stance, and by the time the concluding salvo of “Attack Attack” finishes, you as a listener will want to immediately put the album back on for another go around. Already leveling audiences in Europe, Skull Fist prepare to bring legions into the fold in any country that lives for the cause, dies for the cause, and isn’t afraid to admit that metal is not a passing fad- the staying power lasts forever!

LEGIO MORTIS – The Human Creation And the Devil’s Contribution