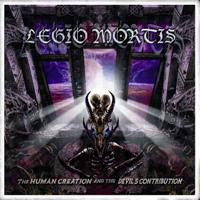 LEGIO MORTIS – The Human Creation And the Devil’s Contribution

And here we have an example of a band that has decent musical skills, occasional knack for melody, horrible songwriting with the exception of one track ("Life Denied") and absolutely atrocious vocals. One way to describe the atrocity would be to think of a man being strangled to death and given a microphone to express himself. Another way is to think back to the Fear Factory’s debut album “Soul Of A New Machine”, which otherwise great, features a laughable performance by Burton C. Bell on song no.1 “What I though was life,etc.…” where this now extraordinary vocalist sounds like he started growling a day before. But I think LM vocalist is actually worse than both of these similes. Hell, I think I can do a BETTER job at singing for Legio Mortis than the current employ!

But not all is lost (pun intended as they cover Paradise Lost on one of the tracks). Liv Kristine, a beautiful woman and even a more beautiful voice of ex-Theatre Of Tragedy and current Leave’s Eyes, guest sings on the only song that doesn’t make me want to light my hair on fire just to stay awake, “Life Denied”. Yes, the regular vocal is still present but it morphs into the holy-shit-I-am-choking-on-my-own-vomit variety. Liv is, of course, phenomenal and I suspect she at least co-wrote this song because it’s not bad at all. It reminds me of Amorphis from “Tales” or “Elegy”.

Another song, “Buried Love”, has a good melody, but the whole thing comes off as a recital of a Dimmu Borgir severely beaten with baseball bats and yet somehow continuing to play their instruments. Finally, the coup de grace, “Pity The Sadness” Paradise Lost classic is butchered so badly that I have visions of Greg McIntosh (PL guitarist) repeatedly bashing his head against the wall in catatonic throes of desolation and anguish. Then, as if hilarity was not yet complete, no sooner did the last riffs of that song end, Legio begins the next song with a riff so goddamned similar to “Pity” it’s hard to believe it’s not another tribute.

Excepting “Love Denied”, I can hardly wait to erase this abomination from every device that can play, store or revive copies thereof. And we wonder why our fathers say metal is just useless non-musical noise! Even Grinch would get a heart attack AFTER his conversion to a nice guy when listening to this crap.

Make no mistake: I award this 2 points ONLY because of Liv and “Life Denied”. Although I wonder how she felt about the sexist, oh so cleverly and maturely named “From Throat To Cunt” lyric they, ahem, sing, on the equally useless track.

Peace of advice to Legio Mortis: disband. Or better still: lose the vocals, become an instrumental band or find a better throat for your currently unlistenable noise torture.

SKULL FIST – Head Of The Pack