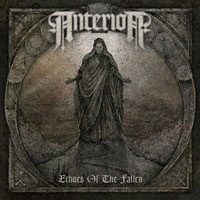 ANTERIOR – Echoes Of The Fallen

The UK metal scene is alive and kicking as this quintet Anterior bring their brand of melodic death metal to the masses for a second full swing. “Echoes Of The Fallen” comes on the heels of solid touring stints across their homeland and playing the prestigious Bloodstock and Download festivals from 2008-2009. With their latest drummer James Cook firmly entrenched in the band, these 10 songs illustrate a unit taking their live experience and translating their material to be ready for impact on that level.

Guitarists Leon Kemp and Steven Nixon dazzle with their dual speed harmony skills through the opening 34 second salvo within “By Horror Haunted” and the lead heroics continue with a Bay Area meets neo-classical motif at other points of this blistering cut. Another standout is “The Evangelist” with James Cook lighting up the double bass metrics in varying degrees of slower and hyperkinetic motions while his snare and fill parts often are hit at different pacing. The major minus in Anterior’s approach lies with vocalist Luke Davies. As great as the music is, his one dimensional, hoarse screams keep songs like “Blood In The Throne Room” and “Venomous” in the typical metal core class where I hear the anger and little else when it comes to vocal versatility. Maybe as an older journalist I expect equal emphasis on vocals as I do the music, and Anterior’s foursome on guitar, bass and drums tips the see-saw in that favor over the strained scatter shot word spew.

The ending double bass/guitar harmonies shuffle employed on “Senora De Las Sombras” proves Anterior are a force to be reckoned with. I believe “Echoes Of The Fallen” will appeal to the majority in the melodic death field who love guitar players that push their ability to the limit – but one hopes the vocals improve or Anterior may struggle to make it behind opening act ranks.

ROGER GLOVER – If Life Was Easy