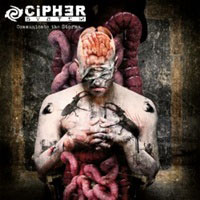 Gothenburg Sweden’s Cipher System take a 7 year break between albums while retooling half their six man lineup. I have to be honest that back when their debut album “Central Tunnel Eight” came out in 2004, I don’t remember anything really special sticking to these ears with their sound. Possibly the long break could pay dividends though – and you have to be willing to give artists the benefit of a second look. New members are vocalist Karl Obbel, lead guitarist Andreas Allenmark, and drummer Emil Frisk – and “Communicate The Storms” resonates with this larger confidence in terms of seamlessly incorporating, clean/harsh vocals, Evergrey-like lead twists, and keyboard tones from Peter Engstrom more in line with dance acts than metal bands.

The instrumental breaks showcase affinity for the poly-rhythmic Meshuggah guitar/drum chops, especially early on “7 Inch Cut” and the monstrous title track. Karl’s preference appears to be a semi-monotone acidic scream montage, occasionally varying the potency into highs and lows for a more melodic or atmospheric effort such as “Objection” which receives dual guitar harmony enhancement for the bridge and chorus work. Musically songs like “The Stairway” and “Project Life Collapse” appear to take the framework of Soilwork to opposite directions- the former more challenging and exciting with the guitar interplay and the latter hinting at more modern metal-core breakdowns intertwining melodic keyboard patterns.

The melodic death metal genre needs bands like Cipher System who aren’t going to merely remain linear in their approach in order for fans to not stagnant and eventually move onward into darker (or safer) pastures. As the closing jackhammer riffs of “The Failure Starts” fade from my brain space, I leave knowing that Cipher System possess the creativity and experience to maintain huge strides in their music for years to come.

DEADEND IN VENICE – See You On The Ground