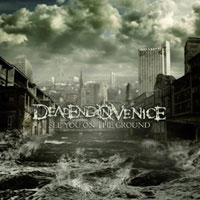 DEADEND IN VENICE – See You On The Ground

“Me, myself and I can trust each other, sad but true…trust me you die first!” preaches Deadend In Venice in “Personal Decay” and who would disagree, he or she who had been around the block for a while? That track is one of the more interesting on what is, essentially, a catchy and great melodic death metal album with a clear if slightly “hit” production that stands up well to multiple spins.

Melodies are aplenty on this, DIV’s debut album; although I am not sure it was necessary to include both female clean (Annabel Klein) and male growls (Chrisian Litzba, Kevin Klein, Annabel’s brother?) vocals on nearly every track. It sometimes kind of detracts from the overall aggressiveness of the material. This can be easily concluded from” War”, a song completely devoid of female vocals and where the growling and guitars bring to mind the criminally underrated Dutch band Detonation, which good luck finding any of their albums in the old U.S. of A. It concludes with a melodeclamation and melody straight from Paradise Lost’s vein. It is probably my favorite track on this album.

Most songs will evoke the echoes of the usual suspects in melodeath: In Flames, Dark Tranquillity, Soilwork, Callenish Circle (another criminally underrated Dutch band with virtually no presence in American record stores). But DIV is infused with a little of the Trium-vish metalcore/thrash as well.

It is an enjoyable album which I like listening to and glad to have on my iPod, but it frankly brings nothing new to the table that is already being crushed with the weight of similar bands bearing upon it. Although I have to admit that musicianship and songwriting is impressive and songs are varied enough so as not to give off the impression you are listening to 8 worse versions of the first track.

One more track that I found exceptional was the penultimate on the album “Dirty Little Princess” where the female vocalist, Annabel Klein, has such a thick accent you instantly recognize them as a European band and I do not mean England (translation: Germany). This song fits more with the female vocals and has a very gothic touch with decent and fresh melodies. It’s actually pretty catchy, I found myself unconsciously humming it all fucking day.

Good stuff, recommended if you are into melodeath, but not a revelation by any stretch of imagination. It has almost no filler, unless you count the slightly sub-par closer. The album also grows on you already with the third spin so it’s possibly that my score is too low and should be more in the range of my fellow reviewer. But I think originality in melodeath is more important than in any other genre just because of such fierce, prolific competition. In any case, a solid effort and definitely great for a debut.