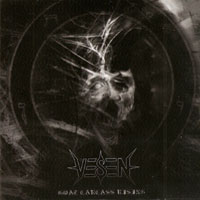 The door to black n’ roll was opened to me, as to so many others, through the fandom of Norwegian folk metal band Windir. Following Windir’s dissolving the remaining members formed Vreid, which since day one was thought by yours truly to be the best black n’ roll act in existence. That is until I lend ears to “Goat Carcass Rising”. I don’t know why this Norwegian band has passed me by, but my attention has now officially been turned. Forget Vreid, Forget Chrome Division and any other rock/thrash/black amalgamations. Vesen is claiming the throne as the black metal equivalent to Mötorhead.

The attitude, gritty sound and general ballsyness on “Goat Carcass Rising” is invigorating and refreshing all through the album. The variation is perfect between slow- mid- and up tempo tracks. The melodies are addictive and the humorous lyrics add to a complete product that works in most areas. I predict that this band must kick some serious ass in a live setting. Just chew on these feisty song titles: “Spotlight Junkie”, “Flies to Shit”, “Goatskin” and “MonuMental”.

In the mid 2000’s Vreid might have overshadowed Vesen with their two first black n’ roll classics “Kraft” and “Pitch Black Brigade”. In 2011 however I daresay the tables have turned. Compared to Vreid’s latest efforts I much prefer “Goat Carcass Rising”. This might be due to my love for Vreid’s earlier work and reluctance to accept their artistic evolvement of the band. If you share these sentiments you should acquire “Goat Carcass Rising” immediately and save the rest of your allowance for Vesen tickets and beer. I’ll see you at their next gig in Oslo.