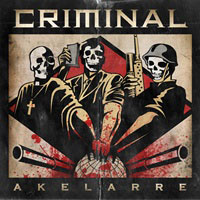 Transplanting from Chile to a more formidable UK a few years ago (especially for touring opportunities), the thrash quartet Criminal follow up 2009’s exciting “White Hell” with their seventh studio record “Akelarre”. A word from the Basque language and literally translated as ‘witches sabbath’ in English, the band also have a new lead guitarist in their ranks with Olmo Cascallar. What hasn’t happened in terms of the group’s style is any sense of pandering to the masses in the hopes of a bigger monetary payoff. Criminal live for the roots and spirit of dirt under the finger nails thrash- raw, relentless and militant in its pursuit of the right audience.

Vocalist/guitarist Anton Reisnegger leads the troops through another 10 song exercise in old school ethics while not forsaking some of the tricks of recent heavyweights like Machine Head. I don’t think I’m far off the mark in stating Criminal have an affinity for Sepultura, Slayer and Metallica in tracks like “Order From Chaos” and the steady double bass marching “State Of Siege”. Anton’s vocals are more in line with the German troops, sounding like a cross between Schmier and Tom ‘Angelripper’ from Sodom if tangling with Carcass in a triple threat wrestling match, delivered to bone chilling measures on the mid tempo highlight “The Power Of The Dog”. With no cut over 5 minutes, Criminal keep the arrangements sharp and moving, even incorporating blast beats in “Vows Of Silence” without over using them.

Those who seek sleek, pristine production values out of their thrash bands will probably shudder at this live sounding work recorded at HVR Studios by bassist Dan Biggin. I for one applaud that decision making, as most of the sounds are very natural and it’s nice to hear a drummer who plays this material as if it would be heard on stage and not drowned with Pro Tools computer generated triggers. The doom/ Black Sabbath effect comes out more in the final 2 minutes of closer “La Santa Muerte”, as layers of guitars envelope your headspace.

Much more in your face than “White Hell”, Criminal aren’t losing their grip on thrash with “Akelarre” – and could show the next generation plenty about songwriting and aggression with this release.

GALLOWS POLE – Waiting For The Mothership