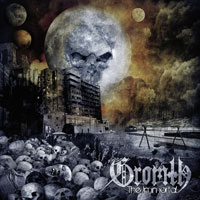 After really getting into black metal during the last ten years, I became more and more puristic and, going along with that, there was a scorn for any type of instrument other than guitar, bass and drums. Then Gromth came along and changed all! Their orchestral black metal integrates classical instruments with the aforementioned in a manner I have never heard before.

Gromth’s majestic first output "The Immortal" follows a highly original story about the struggles of a demon brought into the human world. Listening to the lyrics is like watching a movie with a soundtrack on par with high class outputs like "The Lord of the Rings". Many a band before was inspired by movie soundtracks, but only Gromth have managed a fluidity between the instruments that makes them integrate naturally. They haven’t achieved this by way of turning back the aggression though. The vocals are vicious and of a type you would rather expect in Gorgoroth. The guitars accentuate the aggression through their staccato attacks and I would not be surprised if they stood in an orchestral assembly side by side with the violins and contrabass.

The true beauty of this album though lies not in the strong attacks it delivers, but in it’s melodic aspects, both of the guitars and the orchestra. My first question when listening to this release was: "Is this a real orchestra?" And while it is not, it sound better than a real one! There are so many instruments playing their part that discussing it all under "orchestra" cannot do it justice! Do you know the feeling when you see a trailer for a fantasy movie for the first time and the music, hauntingly beautiful, gets stuck in your head? Enter "The Immortal"!

A word on the production: While normally, I am an analogue and lo-fi purist ("A Blaze in the Northern Sky" played from tape is the best!), I admit I am astonished by what clarity and definition digital can bring. Resisting the temptation to compress the sound to death, Gromth have achieved a balanced sound which is crystal clear and defined but still carries the punch of metal. But here lies my contention with the album – or should I rather say suggestion? It belongs with the very best of this genre, but Gromth do not transcend them (yet). What I would have loved is a more traditional black metal guitar arrangement, preferably lo fi and analogue and have that accompanied by the orchestral beauty. But other than that, let me repeat, for ten years I didn’t give a fuck about orchestral/symphonic metal – and Gromth changed that with a superb album which can measure itself with the finest of movie soundtrack composers and the finest in black metal.