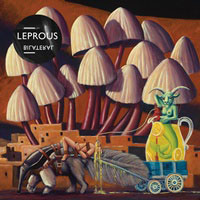 Norway progressive metal is gaining respect in other nations – probably due to each act’s ability to separate themselves within this genre. Pagan’s Mind establish themselves as the front runners, but this young quintet from Oslo known as Leprous can align themselves well with their unique influence strokes on this third album “Bilateral”. A trumpet solo in the quieter section of an otherwise 70’s like Zeppelin-esque meets Pain Of Salvation-like “Thorn”? Keyboards banging in classical rhythms against a black metal type riff and 500 mph double bass before returning to some sort of atmospheric tennis match between shouted verses and Middle Eastern-like guitar jams on “Waste Of Air”? The seemingly incongruent mishmash works for these musicians – probably through fervent pre-production, rehearsals and an underlying sense of mystery.

The guitar lines are often alternative in nature, gliding next to the clean timbre of Einar Solberg’s natural tone. “Crpytogenic Desires” throws in the bright Rush-like time signature manipulation during the verse breaks but also contains quite a danceable Tobias Ornes Andersen drum beat through the course of the arrangement. I even enjoy the times where Einar’s voice explores Michael Sadler/Saga progressive rock terrain such as the epic 8:33 closer “Painful Detour” and the instrumental sections rise and fall like you are taking a trip on your favorite carnival ride.

Leprous aren’t predictable in terms of their arrangements – they feel as comfortable exploring shorter constructs of 4 minutes and less like the opening double salvo of the title track and “Restless” just as much as expanding the playbook for a conventional longer song such as the 10 minute plus “Forced Entry”. And it doesn’t get much more bizarre than the cover art for “Bilateral” – the flowing lemonade, animals and other scenery from Jeff Jordan (Mars Volta artist) just as far out as the band’s music.

I can understand why Leprous have been gaining ground with festival promoters all across the globe. This may not be a record you understand the first five times you hear it – rest assuredly when the synapses click though, “Bilateral” will reverberate and echo on your brain with longevity.