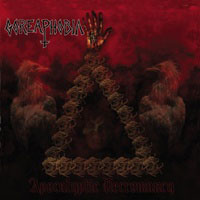 Back in the early death metal underground, many acts slipped through the collective cracks due to not falling in line with the trends of the time. Be it Swedish Sunlight studios and its buzz saw guitar tone or the American scene which favored blast beat speed and gore lyrics for its leaders, many bands who should have been bigger based on their demo output didn’t get their just rewards. Philadelphia, Pennsylvania’s Goreaphobia would be one of those bands – crawling their way up the ladder in the early 90’s through a series of demo and vinyl single appearances and then fading away by the middle of the decade. Finally releasing their debut album “Mortal Repulsion” in 2009, vocalist/bassist Chris Gamble and guitarist Alex Bouks proved to the world that a second shot at redemption may have taken 15 years longer than it should have, but the results are still cranium crushing death done without any ear towards trends or commercialism.

“Apocalyptic Necromancy” is the second album, and along with newest guitarist VJS (Crimson Moon, Kult ov Azazel) and drummer Jim Roe this four piece continue their savage, non-compromising onslaught through these 12 songs. Goreaphobia musically embody more of a classic, doom-laden darker approach a la the European brigade, encompassing melodic lead play at times to distinguish themselves from the Slayer-esque wheel and burn tactics. “Xurroth Rreeth N’Ves Helm” for instance features some cool opening harmonics and concludes with VJS holding out a few key notes to re-emphasize the key punishment through the main riffs. When the group does pick up the tempo, there’s more of a traditional meets epic nature to the rhythms, making a song like “Void Of The Larva Queen” more like Celtic Frost meets Coroner. Chris Gamble has a throat induced low pitch nature to the vocals- evil and yet surprisingly clear to make out most of his lyrics.

Natural sounds also make “Apocalyptic Necromancy” so appealing to the fans. Listen to the cymbal hits and double bass within “”Igigi Reactor” and you’ll conclude Jim Roe can easily pull off this material live without any loss of conviction or ability. The lone epic “White Wind Spectre” starts with a simple yet repetitive bass and drum interplay before Chris’ whispering mannerisms explode with more of a Mercyful Fate, horror guitar sound maze.

Making up for lost time, Goreaphobia prove old school death metal still has plenty of vitality left in the scene.