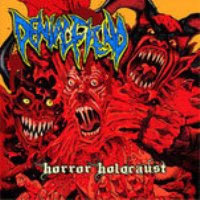 Denial Fiend are quite a proposition when you look at it – Terry Butler of Death/Massacre/Six Feet Under/Obituary on bass, DRI’s Rob Rampy on drums, Sean Williams of Massacre on guitar and best of all, Blaine Cook (ex-Accüsed) on vocals.

The sound is pretty much what you’d expect given the lineup: mid-paced hardcore-tinged thrash/death based around themes of murder and insanity, something like a mash-up between The Accüsed and Six Feet Under. While there is plenty of inventiveness on offer, the song-writing lets Denial Fiend down on every count. "Horror Holocaust" is not as unhinged and intense as it could have been and although there are one of two good choruses, there is nothing that will really stick in your head after you’ve stopped spinning the disc.

Perhaps Blaine should sort out his differences with The Accüsed and the rest of the guys should concentrate on their other projects, because short of a major overhaul, Denial Fiend is not going to leave much of a mark.