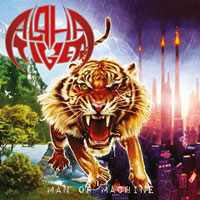 German traditional/speed metal band who roar straight out of the 80’s songwriting bag of tricks on this “Man Or Machine” album. These 9 songs have so much in common with the mid to late 80’s power sound, especially American acts like early Heir Apparent, Riot circa Thundersteel and Deadly Blessing, plus a heavy dose of the Iron Maiden/Judas Priest double harmonies for good measure. Vocalist Stephen Dietrich lives in the stratosphere of high pitch note holding and screams – evoking some John Arch moments in songs like “Crimson Desert” and the mid-tempo Helloween-like “Against The Time” (complete with the circus theme antics from the 4:09-4:17 mark).

Guitarists Peter Langforth and Alexander Backasch propel much of this material with just acute knowledge of precise power riffs and the ability to intertwine exciting lead play while not veering into self-indulgent excess. “Martyr’s Paradise” for instance comes out of the gates blazing a la Drive “Characters In Time” and still keeps the riff and solo machine rolling for spirited NWOBHM tradeoffs and high note action. The rhythm section of bassist Dirk Frei and drummer Axel Patzold gain a chance to throw down more of their speed metal chops on a faster track like “Karma” – chuffed at the challenge to flex their dexterity and ingenuity.

Are there aspects that could be improved? Certainly – the production values are a touch low and I would love to hear Stephen use all parts of his multi-octave range with more versatility on future recordings. Outside of that though, this one is sure to be a gem of a record for those who miss the unheralded, unsung power, traditional acts who stood between the changing thrash and true metal landscape.

Great to hear former Noise label head Karl Walterbach back in the scene with Sonic Attack – and I think he’s made a wise decision in signing Alpha Tiger as they fill a need that ardent metal followers live and die for.