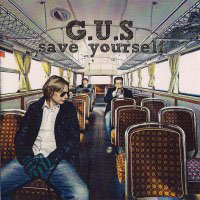 With a catchy blend of rock, folk rock and what might best be described as a sophisticated attempt at country G.U.S’ “Save Yourself” captures the listener right off. With lyrics containing clear cut and obvious political statements about a passive aggressive society the title track “Save Yourself” imprints itself as a highlight. The highlight marker gets passed on both ways on the album track listing with opening track “State Calling Man” and third runner “Set Me Free” delivering terrific efforts.

Halfway into the album G.U.S changes it up a bit and offers what might be interpreted as a mixture of anxious social commentary and romance in “Josephine”. The musical consistency of “Save Yourself” is like a breath of fresh air into a music world which seems obsessed with pushing 20 different genres onto a 10 track album. The lyrical variation saves G.U.S from sounding preachy and it displays some width in the song writing capabilities of the band. The album closes down with “My Yellow Gun”, with well placed instrumental sections and a lyric up for interpretation it is a worthy ending to the 2011 full length effort from the Norwegian band.