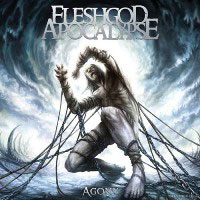 When reviewing Fleshgod Apocalypse’s "Mafia" EP earlier this year I found their orchestrated elements to disturb their excellent death metal. I even went as far as suggesting them dropping their orchestral dwellings altogether and focus solely on their strength, being hard hitting old school death metal. Well…, now their new album has arrived and I have eaten my own words, regurgitated them and devoured them several times over. This album caught me off guard as it is lightyears ahead of what was presented on their EP. Their surgical precision performed death metal is still the basis, but the orchestration has been perfected and enhanced tenfold. Thank you Fleshgod Apocalypse, for totally disregarding my foolish advice. This might very well be the best album of the year as far as I am concerned. It definitely deserves the honor of being the first album I award 6 points while reviewing albums for Eternal Terror.

I don’t know where to begin when praising this album. I can tell you that I have never heard anything like this before. Each song is world class technical death metal. In addition each song is orchestrated by a magnificent symphonic onslaught in the background. It is as if a continuous symphony is playing in the background of the whole album, with eight kick ass death metal songs laid on top, foregrounding the symphony while at the same time perfectly incorporating the symphonic elements with death metal. The symphonic orchestration isn’t as prevalent as on the latest Septicflesh, but I would go as far as stating that Fleshgod Apocalypse knocks any symphonic metal band the last years out of the ballpark. The overtly pompousness of later Dimmu Borgir or Septicflesh is in my eyes overshadowed by this complete masterpiece. I regard Septic Flesh’s "Sumerian Demons" to be my favorite symphonic extreme metal album. If you share this sentiment, "Agony" will send you spinning into spastic euphoria.

The production is also much better than the EP. I don’t know how it’s possible, but it’s like the band metamorphosed these last few months and arose a beast totally worthy of the band’s name.  The variation also ensures that this is an album with long life expectancy. The pace is relatively high throughout the album, but they know how to slow it down just before it becomes repetitive. Then there is the excellent adding of clean high pitched operatic inspired vocals every now and then by the bands guitarist, which fits the mood of the songs like a fleshgod gauntlet.

Fleshgod Apocalypse has certainly forced their way into godlike status and will have some monster expectations to live up till after this album. Can’t wait to see this ensemble live or to see what they can do in the future. As I have past my 20’s by some years now I notice it is farther and farther between the bands that really enthuses me. It is therefore that more exciting when a band appears out of nowhere and totally knocks me out. But seriously, what other band can be said to overshadow both symphonic monster Septicflesh and tech death metal masters Decapitated in one year, with one singular album. I am impressed, in awe and bow myself to the ground and kiss the metal leggings of the true Flesh God. If this is the encore to the coming apocalypse, I welcome it. Consider me a convert. I have seen the light, and thy name is "Agony". If any new band deserves to become world renowned in 2011, it is Fleshgod Apocalypse.