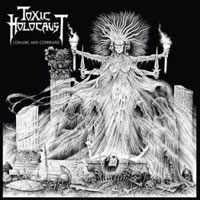 Joel Grind and his Toxic Holocaust have been around for about 12 years and "Conjure and Command" is their 4th full length. They continue as on the 3 previous albums, with reasonable basic and filthy black thrash. Almost all the songs are built around his riffs and his distinctive vocals. Sonically, this is much better than before, the songs are richer and with this album it may seem like Toxic Holocaust has grown up and has become an exciting addition to the international thrash metal scene.

There are some slower songs on this album. Some of them work quite well, but mostly it is the fastest songs that favuor Toxic Holocaust. There is less punk in the music of Toxic Holocaust this time and this is perhaps the main cause that everything sounds a bit more "adult".

The highlight of "Conjure and Command" comes early, namely in the opening track, "Judgement Awaits You".