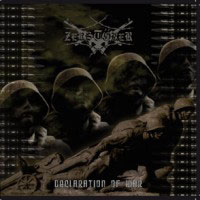 Without being too stereotypical, Germany has one major affiliation for yours truly when it comes to metal and that is heavy, fast paced metal. Kreator and Tankard carries the torch for those with a taste for speed, with Scorpions and Gamma Ray bringing up the rear with some radio friendly sing a long tracks (there are more bands but those will do for now). Zerstörer embraces the weight of the earlier mentioned bands while loosing some speed along the way and adding more brutality on their 2009 studio effort “Declaration of War”.

So how does it measure up? Well the lack of speed makes the music quite droning at times but it never enters doom/stoner metal territory. Rather, when adding on the brutality it sometimes sounds like a black metal band on anti-depressants, sure the brutality is there but it feels poorly executed and often misplaced. Returning to the earlier generalisation ‘all German bands play fast’ Zerstorer does make exceptions to their drowsy attempt at black metal, tracks such as “Infernal Warfare”, “Vengeance” and the opening track “Metal Terror” definitely adds speed to the mix.

As the album moves on, having survived the initial lust for more consistency the listener might find the music Zerstörer delivers quite stimulating. It is not bad, songs such as “Vengeance” and “Total Frost” will offer some highlights. It just lacks the professionalism some bands portray in their album structure. The stumbling dependence on variation might indicate that the German trio would benefit from agreeing on one specific musical direction and sticking to it.

Going from an opening of fairly adequate metal, droning along in the middle and closing off in a hazy mixture of speed and darkness “Declaration of War” has it all, it just does not have that musical appeal needed to distinguish it from anything else. The tracks displays about 0.0001% originality, so it you want more of what’s been done before in a less extravagant packaging this is the album for you.