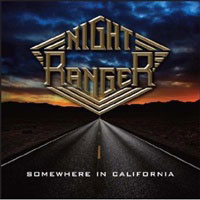 My time with this classic hard rock band with strong AOR-like harmonies goes back to 1984 and the “Midnight Madness” album. I remember bringing this one along on cold winter road trips with my Sony Walkman to keep me occupied as my parents ruled the car radio roost. The mainstream audience probably remembers “Sister Christian” the most, but for me “Rumors In The Air” and “Touch Of Madness” clicked strong and made me keep tabs on this act through the years.

After their “Hole In The Sun” studio return a few years ago, Night Ranger feel confident and vibrant in today’s open-minded music climate. “Somewhere In California” as a result bears a great resemblance to those early Night Ranger years, where Brad Gillis could wield lengthy, melodic solos like no other- and this time teams up with Joel Hoekstra on some searing dual harmonies for the lengthy throwback “Follow Your Heart“. An album where bassist Jack Blades and drummer Kelly Keagy form a warm vocal union on the obvious opening single “Growin’ Up In California”. And yes, for those who love the softer, slower side of Night Ranger, “Time Of Our Lives” continues their stellar representation of power balladry.

A lot of the songwriting is built for stage lift off – be it the cranking guitars on “Lay It On Me” that features Jack Blades with his sneering, sarcastic delivery complementing Kelly’s conventional rock radio melodies or their exploration into psychedelic meets epic rock overtones with latter day Beatles’ harmonies on “Live For Today”. Veteran bands these days don’t succumb to following what’s ‘hip’ in the modern scene – and I applaud Night Ranger for really focusing on playing within their heads and hearts, delivering timeless songwriting and outstanding performances that I believe all generations of followers will dig into.

If I had to compare “Somewhere In California” to the Night Ranger catalog, I would say it’s got the spirit of the first two albums along with the enthusiasm and modern benefit of “Hole In The Sun”.  Easily their most potent and memorable front to back effort in 25 years. Who says the old guard can’t teach the newer musicians a few things about recording and writing these days?

UNEARTH – Darkness In The Light