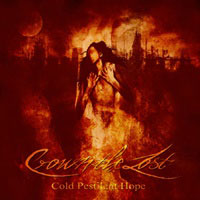 Pennsylvania’s Crown The Lost are one of the great new breed of US power thrash bands to come out in this past decade. Bold words I know, but for my money they have an awesome riff and harmonic sensibility with both guitarists, and couple this with an energetic, bold rhythm section who can blast one minute and then throw down some off-time progressive madness and killer melodic traditional main vocals it’s a smorgasbord  to sonically take in. “Cold Pestilent Hope” represents their third full length, and even with a number of lineup changes they haven’t lost sight of delivering an entertaining metal album.

The newest members joining founding guitarist David E, Gehlke and his axe compatriot Joe Bonaddio are bassist Timothy Boyle, drummer Argel Marchelletta and vocalist Leon Mallah. Stylistically the 11 songs on “Cold Pestilent Hope” appear to have less technical virtuosity and more of a cohesive assembly, making tracks like “In Defiance Of Sanctity” and “Eyes Without Sight” flow a little more smoothly from riff transition to lead break and back again. Joe still throws down the core screams to give a lot of the songs modern audience appeal, including the Wargasm-like “Bloodsoaked Serenity” and faster Forbidden-ish “Forgotten And Damned” where the contrasts solidify the urgency of the arrangement and Argel hits some impressive high notes and sustains them like the best vocal metal mentors in the business.

It’s difficult to pin down one particular band Crown The Lost most adhere to musically. There are splashes of Flotsam and Jetsam here, Heathen there, and a strong sense that the Gehlke/Bonaddio axe slingers really put 10,000 hours plus of discipline into their writing, as they know how to keep things heavy, memorable and interesting all the same. “Inexorable” being a shining example, the lightning fast taps against the stair case riff steps moving from quick to mid-tempo to straightforward power and back again. On bass Mr. Boyle has that East Coast D.D.Verdi/Frank Bello thump down pat, right out of the gate with the opening “Pray For Death” instrumental and delivers all throughout the record.

As far as Leon Mallah replacing Chris Renaldi, this should be a seamless transition for most fans. He has the Bruce Dickinson like presence to go for all ranges, and yet doesn’t feel the need to hit the dog whistle highs that Chris did on their previous album. His best work includes “Separate Blood From Waste” where he comfortably soars above a lot of the tricky guitar parts (ascending and descending within a 7 second measure without missing a beat) and the dynamic, pulsating title track.

In conclusion, “Cold Pestilent Hope” provides listeners with another furious power thrash album and hopefully will lead to stronger touring for this fine quintet.