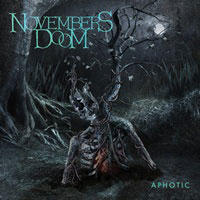 Imagine this reviewer neglecting to take the opportunity to see this IL doom quintet 20 minutes from his hometown when Novembers Doom headlined day two of the Metal Thursday fifth anniversary celebration in Worcester, Massachusetts. Especially in light of “Aphotic”, the latest studio record from this unique, forward thinking doom band with progressive and death nuances. Paul Kuhr exudes pain, sorrow, and anger through his natural death vocal proclivity and equally eerie, hypnotic clean voice – using both to extreme measures in one of the album’s highlights “Buried” as you can picture his words coming to life, ‘the rope around my neck’ visually imagining a life ending.

Anneke Van Giersbergen performs a duet with Paul on the acoustic-laden, softer “What Could Have Been” that should appease fans of both singers, another Novembers Doom track that musically really takes the listener into a different territory of aural surroundings. Where Novembers Doom excel is the tightness of their doom riffs, the energy displayed between bass, guitars and drums that just form this low, crushing sound that you can’t help but be moved by – coming to a head on the two part “Of Age And Origin” saga, with “A Violent Day” and “A Day Of Joy” taking on Solitude Aeturnus and Black Sabbath and wrapping them around in a killer Sasha Horn drum tempo that isn’t afraid to have double bass as a power emphasis.

The closing song “Shadow Play” contains some military snare strains and exotic, ethereal guitars from Larry Roberts and Vito Marchese before concluding with a “Children Of The Grave” like riff montage that certainly leaves you floored with metal power. As an eighth studio album “Aphotic” continues the fine style Novembers Doom have always employed and will not disappoint their long-standing following, and hopefully gain a few new converts as they are a powerhouse for the American movement.