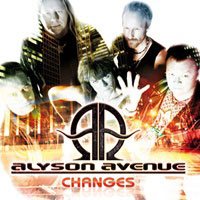 To the benefit of these Swedish musicians, former vocalist Anette Olzon moving on to superstar act Nightwish could move a few more eyeballs in Alyson Avenue’s direction. Marking the third album in their career, “Changes” represents the vocal debut of Arabella Vitanc and continues their classy, melodic rock direction they’ve gained critical and audience acclaim for.

“Don’t Know If Love Is Alive” contains those warm Niclas Olsson keyboards and seductive mid-tempo melodies that eerily recall Whitesnake’s “The Deeper The Love”. Long time friend Michael Bormann does a vocal duet with Arabella on “Will I Make Love” and their voices mesh together beautifully – the main riff comforting and drummer Fredrik Eriksson adding in some spirited entertaining fills. “Changes” benefits with a heavier guitar crunch on certain up tempo songs, one of which that stands out is “I Will Be Waiting” due to Arabella’s higher note holding propensity as she belts out this love song with the passion of AOR greatness.

Considering the seven year layoff between albums, Alyson Avenue ramp up all of the secret weapons to make this a professional comeback. Anette returns to provide background vocals on 4 of the 11 songs, Cloudscape/Fullforce singer Mike Andersson does some male background parts on 8 of the tracks, and even producer Chris Laney gets into the act for “Amazing Days”. Ultimately all the star power in the world doesn’t mean anything if the foundation isn’t there – and for Alyson Avenue, it’s smooth sailing in their songwriting skills and first class performances.

Time vanishes when you take in material like “Liar” and “Fallen” – as you could substitute 1988 for 2011 here. Overall Alyson Avenue appeal to my catchy hook head space – but this isn’t for the heavier contingent.