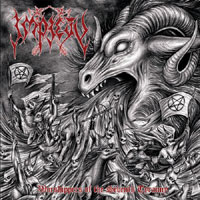 IMPIETY – Worshippers of the Seventh Tyranny

The seventh full length from Singapore’s Impiety has in a short time surprised me a couple of times. For starters, the album contains only one song that is 38:30 minutes long. The song is varied and could actually be split into several shorter songs, but it’s okay that it was done this way.

Secondly, I did not have too high expectations for this album. The reason is that the 2 previous albums from Impiety did not quite convince me that Impiety has so much more to give musically. Neither "Formidonis Nex Cultus" (2007) or "Terror Reign" (2009) gave me anything close to what the band’s first 2 releases, "Asateerul Awaleen" (1996) and "Skull Fucking Armageddon" (1999), did and I felt really that Impiety had outplayed its role as a good band. But out of the blue and totally surprising came "Worshippers of the Seventh Tyranny" and gave Impiety some meat on the bone.

There are many parts on this one the song, including some parts that brings you back to 90ies Impiety. No matter how it sounds, this is black metal of good quality. In a way it is all very predictable, but you never know what happens in the next section of the song. That’s why I like "Worshippers of the Seventh Tyranny" so much. In an interview I did earlier this spring with Shyaithan, he says that he now is only inspired by Impiety, and it explains why Impiety today sounds not unlike Impiety a la the 90’s.