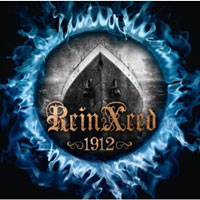 Wasting no time getting another studio release together, guitarist/vocalist/ keyboardist/ songwriter Tommy Johansson puts out his fourth album in four years with the conceptual “1912”. With lyrics based on the Titanic from start to finish, most ardent melodic metal fans know that with ReinXeed musically you are going to get a lot of up tempo, happy melodies, an intertwining of speed riffs and keyboards, and a drumming exercise that rivals Dragonforce proportions. Songs like “Farewell”, “Spirit Lives On”, and “We Must Go Faster” rival the best of Sonata Arctica, Helloween, and Dragonforce, along with a hint of Rhapsody (Of Fire) in terms of just keeping the melodic power and symphony elements at a fever pitch.

Tommy I think took some necessary criticism and went to work on strengthening some of his higher vibrato range – as “Challenge The Storm” probably provides his most versatile and powerful melodies to date for ReinXeed. Outside of the title track and follow up “The Final Hour”, the rest of these songs should appease followers who live for the up tempo charge, the feeling of a team of warriors arming their shields in battle solidarity. With a triple guitar attack, you can get dual rhythms, dual harmonies and sometimes three guitarists playing their arpeggio-laden hearts out. My favorite song “The Voyage” feels like a power metal meets Middle Ages marching arrangement, at certain points the higher vocal melodies taking the lead and at other times the quieter keyboards, bass and drums providing the hook to keep the listener excited and fully engaged- with solo work almost in tribute to the late Gary Moore.

Clocking in at a reasonable 57 minutes, “1912” will definitely sell out of the gates like gangbusters in  revered Far Eastern lands. I would say ReinXeed are moving back in the comfort zone of their earlier material – I still hope for more variation in the drum tempos as merely playing at 150-200 beats per minute can burn consumers out easily. Exciting for those who delight in speed and excess.

IMPIETY – Worshippers of the Seventh Tyranny