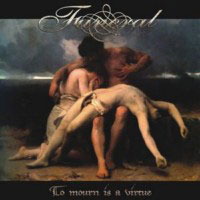 FUNERAL – To Mourn Is A Virtue

Funeral has been making dark, mystical funeral doom metal since 1991 and is currently back in the metal spotlight with “To Mourn is a Virtue”. Finding the right words to describe this album proved quite difficult. Attempting to provide the reader a visual image of how Funeral creates a dark, ominous world of death, despair and hurt, while droning out heavy, doom inspired riffs was not an easy task. Funeral, largely being attributed as the creators of funeral doom metal certainly reaffirms their position in the hazy underworld of funeral doom metal with “To Mourn is a Virtue”.

As the opening track “Hunger” begins its decent into darkness, it does so with such ease only obtainable to masters of this musical style. The orchestration is perfectly structured throughout the album to provide a continuous, optimal flow of doom. The lyrics focus on pain, death, anguish, despair and other feelings of personal and emotional grief. The albums heavy, drawn out riffs, often matching doom pioneers such as Electric Wizard, mixes masterfully with the lyrics to create a visual ambiance of death! The delicate vocalisation on “Dancing in a liquid veil” combined with the perfect orchestration makes it an album highlight. The closing track “Wrapped All in Woe” features some angelic tones by a female guest singer and provides a worthy ending to what can only be described as a close to perfection effort by Funeral.

“To mourn is a Virtue” offers a dark path into the mystical emotions of a human being. It, as mentioned numerous times, combines the slow, thunderous riffs of conventional doom/sludge metal with lyrics of pain, death, self despair and such forth. The musical composition offers the perfect stimuli to an impressionable mind. Its calm, unobtrusive tones suck the listener down to the inner depths of human emotion. This album includes some tracks inspired by “To Mourn is a Virtue” (Demo, 1997) and previously unreleased tracks. It lines up as a musical highlight of 2011. A musical masterpiece from the Norwegian doom pioneers!