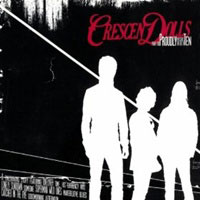 Sometimes you just need to hear a band out for a good time. They aren’t going to revolutionize the world – they just provide the musical injection to your day that makes you forget all your immediate stressors and release energy in a positive way. Sweden’s Crescendolls are a stoner rock power trio with that sole aim- crashing into your cranium and circulating riffs, drum parts and vocals with specific certainty.

Their debut album has an intriguing title of “Powertrio Proudly Presents Ten Out Of Ten”. These Swedes have taken the time to work on their brand of rock n roll for six years, opening for 69 Eyes and gaining the chance to play the Swedish Grammies as well. Lead vocalist/ bassist Joel Frid has that Queens Of The Stone Age meets southern rock drawl down pat on an immediate mid-tempo crusher like “Someone” as drummer Johan Claesson pounds with 70’s-like precision and guitarist Emil Claesson adds in his fuzz box, feedback laced riffing and solo work. The follow up “Superman” focuses on a high energy, power pop type arrangement, a lot of the riffing closer to the Franz Ferdinand method of operation. Another instant clicker with me is “Catcher In The Rye”, the vocal, piano and guitar parts all recall latter day The Beatles if you threw them into a stoner rock motif, Joel and Johan joining together for some glistening harmonies in this one.

The album contains amazing pacing- the first three songs all coming in under three minutes so as to get those hooks in and then move ahead quickly while the latter half of the album contains a couple of 5-6 minute efforts where the band can jam a little bit. I would imagine Crescendolls get plenty of response in live situations, and this should be one in your collection if you need a good old fashion hard rock kick in the ass.