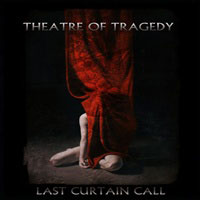 Sadness enters the minds of consumers who lose their favorite bands. The years you spend with albums, memories surrounding concert experiences, chatting with your friends about these musicians- it tends to feel like another live being in your everyday world. So I’m sure many people across the globe mourned the decision in October of 2010 when Norwegian gothic metal act Theatre Of Tragedy announced their retirement. Even when music politics enter the fray, the fans pulled together to get the final funds together along with the band to release a final DVD – also releasing this companion double CD featuring a full length 16 song set list for those who merely want the audiophile experience.

Supporting their final studio album “Forever Is The World”, it’s no surprise that 4 songs are culled from this release, including the stirring opener “Hide And Seek”, the doom-laden “Frozen” and closing tear-jerking piano fueled title track. Reaching through their entire catalog (save for 2002’s “Assembly” release, a wise move due to its more electronic/ less metal standpoint), highlights that stand up well include “A Hamlet For A Slothful Vassal” off their 1995 self-titled debut album and the trio of songs from 2000’s “Musique”, including the darker keyboard tones within “Fragment” as Raymond Istvan Rohonyi’s stilted, pierce and almost spoken word approach contrasts beautifully against Nell Sigland’s siren vocals.

When all the elements come together, gothic metal in a concert environment will take you to another dimension (evidence for me is the Sentenced double DVD). I would rather a group of musicians bow out on a high note rather than when the creative well has run dry. “Last Curtain Call” proves Theatre Of Tragedy were a consistent, passionate band- respectful of their audience and as a result this is a fine swansong.