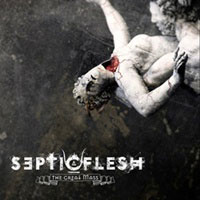 The marriage of classical themes and heavy metal is not new. Through the years, many guitarists and keyboard players have taken inspiration from the likes of Bach, Beethoven and Wagner and interpreted these compositional skills into a powerful, electric context. Usually the most notable for exploring these dimensions have been neo-classical guitarists like Yngwie J. Malmsteen or power/black metal bands who use the force of orchestration for added dimension. For Greece’s Septicflesh, “The Great Mass” takes the listener on a gothic, black, and death metal escapade, standing shoulder to shoulder cinematically with the Filmharmonic Orchestra of Prague and the results are breathtaking.

So many times when bands try to fuse all of these outside elements to develop an original sound, you end up with motion sickness – and I never felt this going through these 10 songs. Sure there are moments of gothic, Paradise Lost-like simplicity like “Pyramid God” – while bassist Seth Siro Anton growls the lyrics to give Septicflesh that underground edge – and then the atmospheric second half of the song underpins your mental awareness, the orchestration penetrating with this wall of sonic haunting. “Five-Pointed Star” navigates from a blast beat torrent into a double bass drumming feast- Fotis Benardo showcasing his super tight and precise snare, bass, and cymbal syncopation while the symphony lines go toe to toe with the furious riffs. My favorite song “Rising” even contains some uplifting progressive parts from guitarists Christos Antoniou and Sotiris Anunnaki V while the latter’s clean melodies make a perfect union with the Ghost Brigade meets Moonspell-like arrangement.

I don’t expect 85% of the digital music consumers in today’s instant fix mindset to get “The Great Mass” – literally or figuratively. This is an ultimate headphones experience. To those who risk, the rewards will be deep and immeasurable. Kudos to the band, the orchestra, and producer Peter Tagtgren for proof that all has not been accomplished in the wonder of metal.

THE BATALLION – Head Up High