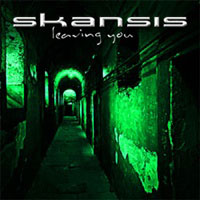 Switzerland and magical hard rock bands appear to go together like a hand in glove. Skansis hail from Bern, Switzerland and on their second album “Leaving You” perform 12 admirable songs in the vein of Shakra and Gotthard. The quintet keep the sound lean and mean – robust guitars, loads of vocal melodies and a rhythm section built for speed and precision. Police sirens punctuate the anthem “I Don’t Believe” while “Rock All Night” lives up to the title with a Whitesnake-like main riff and drumming from Hagmann Matthias keeping the four/four tempo and accents in forward motion to ensure maximum head banging or complete musical absorption.

Reist Reto as a singer isn’t the most clean in terms of his phrasing, and I believe his tone has a little bit of throaty warble that gives material like “Hear Now” and “Back From War” more of a cynical personality quirk that will either thrill you or possibly send you scurrying in opposition. It’s the one area I think needs to be improved upon with some voice strength training if Skansis wants to ascend the ranks to the bigger festival audiences.

You can’t go wrong with the flexible clean and distortion guitar riff techniques from Heiniger Beat – he’s able to keep his ear on each arrangement’s needs, much like the veterans of hard rock knowingly do and puts on spirited display with winning songs like “I Want You” and the title track. Having not heard their debut, I would say “Leaving You” puts Skansis on the melodic hard rock radar, but they’ll need to really step up their game in the future if they want to make a living in this highly populated marketplace.

GRAVEWURM – Blood of the Pentagram