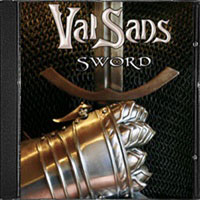 Those who worship at the altar of true metal should hail Austria’s Valsans with their debut album “Sword”. They’ve been in existence since 1996, yet only releasing one demo “Dawn Of Metal” in 2004 prior to this. Playing with veterans like Grave Digger, Iron Savior, Nocturnal Rites and U.D.O. helped season the band’s style – so much so that the five piece certainly have the songwriting and passion to appeal to followers of Running Wild and Manowar with their classic, traditional influences and all for one power sound.

Tracks like “On The Battlefield” and “Eyes Of A Viper” contain epic riffs against twin guitar harmonies, furious double bass throw downs along with the commanding melodies and gang-like background vocals that are trademarks in the metal business. Andy B. Barna has a nasal quality to some of the longer note sustaining portions of songs like “”Mjolnir” and the seven minute “Lady Of The Lake” (with its Manowar-like ‘sword of the kings’ war cry), yet I don’t find it detrimental to your musical enjoyment. Where I do think Valsans needs some improvement would be the solo skills of Thomas Stubics – it’s a mixture of his tone and appropriateness that lead me to believe he needs to work a little harder to be subtle and follow the arrangement rather than throw down a flurry of notes without forethought or feeling. The accents on “Metal Crusade” are an example where I felt he overstepped the needs of the song.

Overall, there’s enough substance and love of metal, mythology and history to appeal to the older generation of fans who miss all their veterans retiring from the limelight. So crack open your favorite adult beverage, grab all your friends and scream these songs to your hearts content.