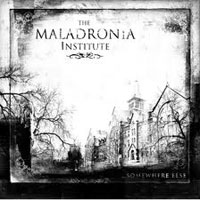 THE MALADRONIA INSTITUTE – Somewhere Else

The Maladronia Institute has played concerts at most of the local venues in Trondheim, and are now planning to present the band and its music to the remaining parts of Norway. My question is: Why only Norway? These guys deliver a very professional and impressive debut, and there is no doubt in my mind that this album can stand out from the crowd in any country. Not your everyday usual debut, this band sounds like they have played together and been around for at least a decade.

But the fact is that the current line-up was established in 2008, and ever since then the band has worked on developing their own sound, something I would say they have accomplished on ‘Somewhere Else’. Influences are many, I hear everything from the mighty Isis to Cynic, Mastodon and to a certain degree Motorpsycho (without being any big expert on that band, only recently ‘discovering’ them through ‘Heavy Metal Fruit’.)

The young Norwegians blends all this into something rather unique, add mellow, aggressive and floating, variation is a key word, but at the same time the famous red thread is to be found throughout the whole album. Like especially Isis the vocals are used more like an instrument, which makes even the hardcore style vocals blend into the flow of the album, and the same goes for the rest of the vocals. The album contains 8 songs and lasts for 39 minutes, which is another big plus, because this makes you without hesitation crave for more, and you automatically push the play button again, and again…

As I mentioned, the band has played quite a few concerts, mainly up north, and you will find a review of one of these concerts in the review section here at eternal terror, be sure to check it out. And if you ever get the chance to see these guys live, I think you should strongly consider going, as there are nothing but positive feedback on their performance. (Note: Check out the link below, you can download the whole album for free on the bands website. Remember to buy the CD if you like it…)

"It’s time to dream. Let’s go to some other place, some other reality, and see what we find there. Chances are, what will meet us is something far beyond the grasp of our fear locked brains. We welcome you to this experience and hope you seize upon it. Welcome to MALADRONIA"