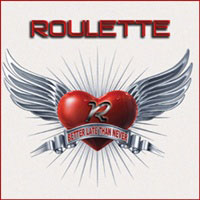 Swedish melodic rock / AOR band who originally delivered this music in the 80’s but never got a proper album release during their existence. Only singles would ever come out until a 2008 re-release on English label AOR-FM… so Yesterrock believed in Roulette enough to give a bigger push and “Better Late Than Never” comes out once again. 15 songs plus 2 bonus tracks mean a solid 66 minutes of Scandinavian melodies and guitar / keyboard riff hooks.

Songs like “Hearts Keep On Burning” and “Run Girl” have the Treat / Nelson like harmonies and hooks, with guitarist Magnus Nelin and keyboardist Thomas Nesslin having an equal importance for Roulette’s sound. When they go for a power ballad like “Evangeline” they certainly reach into the Sheriff/ Alias tool bag to wrench out every last emotion, especially with the powerhouse high notes from vocalist Thomas Lundgren. Sometimes Magnus’ guitar tone rivals Eddie Van Halen’s in the early Sammy Hagar “5150” days, especially in the clean sections of “Dancin’ ” and “City Heat”.

Probably a case of the wrong music at the wrong time for the industry, “Better Late Than Never” should be in most AOR collections as it’s feel good and catchy as all get up. Once again songs like “Reachin’ For You” and “Turn Me On” could have easily been rock radio or MTV staples due to their compact focus and tight songwriting dynamics.

Proof once again that if you dig deep enough, there is a plethora of decent music that may be dated to some but will be treasure troves to others.

THE MALADRONIA INSTITUTE – Somewhere Else