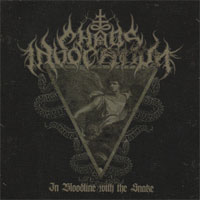 CHAOS INVOCATION – In Bloodline With The Snake

I love the underground. To be more precise, the black metal underground. I read in magazines and webzines that there are 99 % shit, while every now and then there is a noteworthy band arising from the surface of the said underground. And when these artists or journalists, or both, don’t dare to mention any of these so-called shit bands, I cannot trust them. Speak out loud, or shut your fucking mouth! And yes, I am not afraid to mention a few shit bands, such as Striborg, Abigail Williams, Peccatum (first three releases), Revenge, Rudra, Graveworm, God Dethroned (earlier stuff at least), Enthroned, Hate Forest, Hecate Enthroned, Cadaveria, Chthonic, Cruachan, Månegarm, Troll (aside from their new album)… Now, this is solely based on my taste, or lack of it. However, I can mention way more bands that I like and even think are really great when it comes to black metal. A quick shortlist includes Marduk, Limbonic Art, ABSU, Mayhem, Dimmu Borgir, Craft, Satyricon, Leviathan, Cradle Of Filth, Emperor, Secrets Of The Moon, Impaled Nazarene, Bathory.

Now, you may ask what this has to do with Chaos Invocation? Nothing in particular. I just wanted to tell you that I love the underground and I got rambling on about bad bands versus good bands, musically speaking. Sorry for the mess, but life goes on and I put “In Bloodline With The Snake” on again, probably for the 25th time the last 30 days. I have tried to spot weaker points, but so far I’ve managed to come up with only one point, which is also the reason the album receives a strong 5/6 instead of the top score.

However, let us dwell with the product. Yes, product. These Germans can put their soul, blood and puke into the release ten years in a row, but to me, as a listener, it will always be a product. And in today’s metal scene we, the reviewers/interviewers, often have to base our opinions on a cover, the promo-sheet (hah, do people actually get paid to write the nonsense that accompanies album releases?) and some MP3 files. But when a band sends me the whole package, and I get to see the cover, read the booklet and feel the atmosphere… Then I love the underground again instead of all these big labels that save money on MP3 files and whatnot!

But it wouldn’t raise any impact on me if the music wasn’t up to par. Three years ago I gave 6/6 to Watain’s “Sworn To The Dark”. Knowing that the Swedish masters of black metal will unleash their new prophecy this year, I thought, judging from Chaos Invocation’s MySpace, that the Germans would shorten the waiting time a bit. Now, listening to “In Bloodline With The Snake” for what has to be the 26th time in 30 days, they sure do shorten the time. But not only that, for this is high quality black metal. The production is strong, the music is forceful and there’s always the eerie aura connected to the choice of melodies. That the vocals remind me of E.’s is not such a bad thing either.

Chaos Invocation has created an entity of the Devil’s work, making these 11 tracks feel like one journey. Yes, a thorough album where such a thing as the closing minute of “Psalms Of Fornication” doesn’t feel out of place even though the horror-like composition comes out of nowhere. The music as a whole is more fast than not, but never boring. They know, and this is the band’s debut, how to maintain the interest from beginning to end.

Yes, I love the underground where bands create music from their souls, knowing that they will never get rich from this, but create because they fucking HAVE TO! And then have the will to create such a strong product as “In Bloodline With The Snake”, where everything feels in place… Now, that’s black magick! And I’m possessed!

SHADOWMAN – Watching Over You