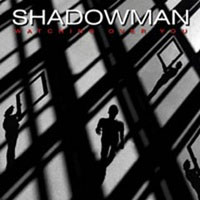 SHADOWMAN – Watching Over You

There’s something spine-tingling when you hear musical chemistry translate into a top to bottom par excellence record. Take the British melodic hard rock band Shadowman. The rhythm section of bassist Chris Childs and drummer Harry James coming from Thunder, guitarist/ keyboardist Steve Morris from Heartland, topped off by vocalist Steve Overland most known for his FM tenure – which on paper already boosts credibility above the pack.

“Watching Over You” is Shadowman’s fourth studio record since their 2004 inception, and my first chance to really explore their sound. It’s not really shocking that songs like “Renegades” and the title track have that AOR hook element that propelled FM to critical/ fan acclaim – be it instrumentally or vocally, the two Steves’ dial in to keep the material fun and exciting, much like the best Journey or Toto albums in their careers. “Across The Universe”  as an album opener has that slight rhythmic flash and fluid organ solo dynamics to prove the quartet can deliver chops amidst a streamline arrangement. “Suzanne” in another era would be a top 5 across the board single – the guitar riff sizzles, and Steve Overland’s vocals seamlessly blend the best of melodic AOR and arena rock while the James/Child rhythm tandem keep the groove and tempo steady and kinetic. Other songs like “Are You Ready” and “Heaven Waits” have that West Coast AOR sheen that Richard Marx made famous in the late 80’s and early 90’s – although the vocals probably have more of a bluesy affect that could remind some of Bad Company.

Tommy Hansen’s mixing knowledge pulls Shadowman into the upper tier for this style – not just in the UK but for the world. “Watching Over You” certainly belongs in the top of the melodic hard rock class of 2011 albums- do not overlook this if you’ve been an ardent follower of the genre through the years.

CHAOS INVOCATION – In Bloodline With The Snake