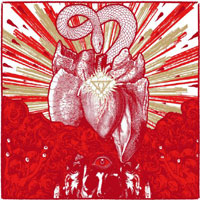 Musically speaking, which is the most interesting factor here due to the fact that I, for one, do not read the lyrics every time I listen to album but every now and then, this is dark black metal. Some fast parts, more mid-paced ones and some even slow. But more than speaking of techniques, tempo and those "musician approaching the music" kind of approach, "Consolamentum" is much more than the mere music. And this is also what differentiates the best bands from the ones in the second row; namely the atmosphere.

You can listen to technically perfect albums day in, day out… for quite some time. But in the end, at least speaking from my own experience, those albums that survive the day and night are those that has that extra thing. It could be the sound of the guitars, the drumming or the harsh vocals, but in Ascension’s case it is the totality from the cover to the last few tunes of dying.

Great tracks all the way, but the brightest, or darkest if you will, momentum of "Consolamentum" is the immense "Rebellion Flesh". The main rhythm and the singing are catchy and stick to my head like a pop-song remains in the head of the empty souls watching the latest reality-TV. But take notice, this is not catchy as in "oh boy, do I get happy"… No, "Rebellion Flesh" and it’s counterparts make "Consolamentum" a total desecration of standardism, of indifference and of joy. This is darkness on vinyl.

Kudos for the, intentional or not, beginning of "Amok", which brought my mind back to Darkthrone’s "Natassja in Eternal Sleep".