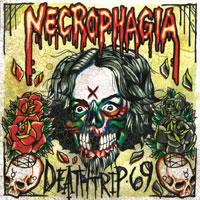 And there, in the middle of "Naturan Demonto" I just got that feeling… You know, shouldn’t I rather play "Season Of The Dead" instead of wasting much time with music made after 1987? Of course not, but the great homage to that album, as well as being the third chapter in Necrophagia’s respect to the Evil Dead movies, is definitely an opener that needs some bloody mention. Aside from this magnificent horror, the rest of the album up to the closer is another feast for the people into heavy riffing.

"Deathtrip 69" is an album that is varied, contains load of great riffs and has a few surprises up its sleeves. The fifth out "A Funeral For Solange" is an atmospheric middle section that gives me as a listener time to breathe in, breathe out before the horror continues. You just don’t know what’s coming next until you’ve heard the album a couple of times. And after that you notice that the songs contain some effects here and there, added not only for the sake of it, but to improve the wickedness.

Necrophagias "Deathtrip 69" is a album that is safely put in the collection, even though it doesn’t contain the uncontrolled insanity that surrounded the amazing "Holocausto de la Morte" album. A couple of tracks bore me, such as "Bleeding Eyes Of The Eternally Damned", which just goes on and on without much going on, and "Suffering Comes In Sixes", a rocker that is too rockish, if you see what I mean. However, they do the necessary evil in the title track. It’s so friggin’ good that had they done ten slightly different versions of this one, with the opener "Naturan Demonto" as a bonus track, I’d even buy two vinyls instead of the obvious one. Insane vocals, samples, a feeling of dying… What more can you ask for?

That they end this album with a dark southern vibe rock track, is wicked and fits the Necrophagia universe. That I personally don’t like this is another story.