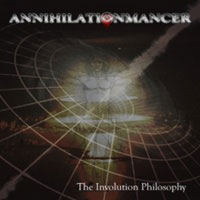 Napoli Italy’s Annihiliationmancer (say that name ten times fast and not sound like marbles in your mouth) have been around since 1994 and released two demo recordings a decade apart. Usually that sends up a warning flag in this reviewer’s headspace – because it shouldn’t take this long to get a debut album on the table. Alas, “The Involution Philosophy” traverses a world otherwise known as techno-thrash, unconventional in its progressive stance with riffing, time signature changes and solo structures.

These musicians love the art of drop dime tempo juggling, divergent rhythm/ lead play and melodies that somehow have to navigate around the progressive structures. It’s safe to say artists like Watchtower and Toxik factor into the band’s ethos, along with slight affinities for Annihilator and Voi Vod through tracks like “Etereo” and “”Apolide”. Another act that comes to mind when you hear some of their jarring riffs and unconventional arrangements would be the Swiss band Coroner – which parallels the core trio of musicians in Annihilationmancer.

Guitarist Bruno Masulli doubles on vocals, and his angry voice is very raspy while he does possess a touch of melody when he tackles the lyrics with a normal clean melody. There are moments where his vocals leave a little to be desired (the title track does contain come cringe worthy parts), but the musicianship of Bruno and his band mates (Angelo Sasson on guitar/bass and Andrea Cannata on drums) more than makes up for this.

Longer songs equals more deep riffs and interplay to savor. I wonder how Annihilationmancer would sound with an even stronger production quality – as I believe this should be in the hands of people who miss late 80’s / early 90’s techno-thrash.

RADIOHEAD – The King Of Limbs