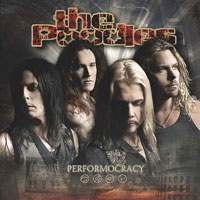 The title of this fourth album combines the words performance and democracy – and I believe these two constants explain the ascension of these Swedes to multi-platinum heights and high chart action across various European countries. Since their late 2005 formation, The Poodles have written theme songs for Sweden’s representation into the Olympic Games, toured with Gotthard and graduated to headlining arena status, and visited many of the prominent festivals across the UK, Sweden, Belgium and mainland Europe. Their attention to detail in terms of delivering consistently high level songwriting and live show presentations brings us to this 13 song record – a logical continuation of 2009’s “Clash Of The Elements” where more time and energy allow the band to craft engaging, catchy hard rock with veteran savvy appeal.

I think some of their best multi-harmony vocal work takes place early and often with this album – right from the get go with “I Want It All”, similar in engagement to the “Pyromania” Def Leppard days with a snake-like mid tempo rhythm and exotic sounding clean/heavy guitar parts. The Poodles also approach other songs with a rawer, naturally live sound such as the mid tempo future set charmer “Father To A Son” and “Your Time Is Now” where Henrik Bergqvist blazes with an impeccable sense of riff timing, adhering to the strengths of the melodies. First single “Cuts Like A Knife” opens with a tranquil piano passage before a slightly majestic backdrop and Jakob Samuel’s emotional delivery carry this forward – which should make this an instant fan favorite and give the band another hefty chart placement. And you can’t forget the grandiose ballad, of which “As Time Is Passing” qualifies in that 90’s Aerosmith meets Scandinavian charm category.

The reason I believe The Poodles have achieved such incredible success in a swift manner all comes down to strong songwriting (and setting pride aside to use outside co-writers), a variety in terms of good time tracks, tender ballads and overall attention to keeping the arrangements catchy and to the point. Current picks to click: “Action!” featuring another epic Whitesnake riff and incessant background vocals and the angrier closer “Don’t Tell Me”.

Hopefully “Performocracy” will encourage all hard rock followers to give The Poodles their time and energy – as I believe they along with Gotthard prove great music can live on through any passing trend.