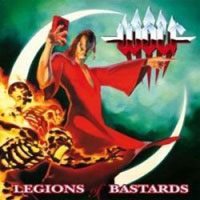 The resurgence of traditional metal across Scandinavia may have begun with Hammerfall in the mid 90’s, but I know many also sat up and took notice of the young talent through Wolf as well with their self-titled debut in 2000. Despite the cartoon-like cover art, guitarist/vocalist Niklas Stalvind took the scene by storm with his high pitch Halford meets Arch range and their exciting, raw energy that acts like Maiden and Saxon had during the early 80’s. “Legions Of Bastards” as their sixth studio sojourn illustrates an act comfortable with their songwriting and willingness to make slow stretches with mood dynamics without forsaking what’s made them stand out for years.

When looking at the background sheet regarding the label’s thoughts on “Legions Of Bastards”, they mention the fact that Wolf are much like Motorhead in the sense that you know what you are going to get: twin lead precision guitar play, addictive, hook-laden chorus work, and pounding rhythms straight to the metal heart. All are on display with songs like “Tales From The Crypt”, “Skull Crusher” and “Full Moon Possession” for instance, as you get plenty of spider web runs and drumming from Richard Holmgren that rivals the classic Clive Burr days. Yet I find this album benefits from more of a mid-tempo anthem exploration, proving that traditional metal (with power) doesn’t have to be purely an adrenaline driven, furious speed to impress the listener experience.

Legendary Mercyful Fate cover artist Thomas Holm keeps the classic sound in mind with this album artwork, as it looks like it’s bringing the song “False Preacher” to fruition. My favorite songs include the mystical sounding “Hope To Die” and the back and forth guitar panning that invigorates opener “Vicious Companions”.  I close my eyes and envision the sea of denim jackets adorning Wolf back patches as you throw the sign of appreciation in the air – my age cut in half at this youthful transformation.

Considering the old guard are nearing retirement (Scorpions, Judas Priest) or veering into more progressive rock ventures with their sound (Iron Maiden), it’s up to younger bands like Wolf and Enforcer to show the world that the basics of heavy metal will never die!