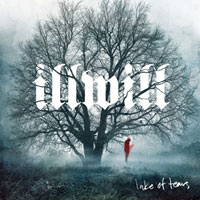 Back in the Black Mark Productions era, a surprising record hit my mailbox. “A Crimson Cosmos” appeared at a time in 1997 when this Swedish band transitioned from being more of a doom outfit to a straightforward gothic metal group- yet with psychedelic, Pink Floyd-like tinges. Even after a brief retirement in the early 2000’s, Lake Of Tears got back together and have been evolving their melodic, gothic and doom influences to the point of album number eight, “Illwill”.

Curveballs happen within the first 30 seconds of “Floating In Darkness”, as the Johan Oudhuis/ Mikael Larsson drum and bass rhythm compatriots ratchet the tempo meter up to thrash proportions before the song returns to a darker, almost Sentenced-like atmosphere. There appears to be a fierceness in many of the riffs on this album, with Daniel Brennare and Fredrik Jordanius taking a page from much of their Scandinavian contemporaries in their picking and heaviness quota where songs like “The Hating” and “Parasites” blend the vitality of Wolf with the traditional spirit of Grand Magus. The closing two songs “Taste Of Hell” and “Midnight Madness” even possess more of a darker, underground vocal approach from Daniel than his conventional melodic range- something that dynamically adds to the total overall enjoyment. In a just world, a song like “Behind The Green Door” with it’s pronounced bass riff leading the way would be circulating across all radio stations from Alaska to Zaire, such is the power of their connection and hook quality.

With focus on the ten songs at hand, “Illwill” delivers in spades the melancholic spirit one expects when listening to classic gothic doom. I felt numerous head shaking, fist flying moments throughout the album, and feel these songs will easily translate on any live stage far and wide. To those who miss guitar-oriented gothic madness geared squarely at the educated metal audience, Lake Of Tears will provide entertaining and fulfilling hours of enjoyment.